The World Bank’s Chief Economist for Africa, Shantayanan Devarajan, writes about using mobile phones for monitoring and transparency. It’s good to see the World Bank looking seriously at the principles of open development.

Each year, the World Bank produces a World Development Report. While there is an extensive consultation process with the draft, the Report is essentially written by a core team of Bank staff. Why not produce the report like Wikipedia, and invite the whole world to write it? As one of my colleagues put it, “Then it will be the World’s Development Report.”

And a fitting symbol of Development 3.0.

That would be exciting to see. The World Bank has recently opened its data to public use, but Devarajan’s idea is several steps beyond that.

Here’s a submission for the next step, that might take us a bit closer to Wiki World Development Reports: Open licenses on all World Bank content, scrapping the current restrictions on all past and future World Bank publications. Those restrictions may seem mild (no commercial use and no mention of permissions for derivatives) but they are not compatible with open licenses, meaning they do not support wider collaborative work, and have no place in Development 3.0. It’s time to open up.

David Stairs of the Design Altruism Project argues that many collaborations aren’t actually collaborative. In a sobering post, he notes that people want to set up a project to be the hub for collaboration in their field… often without checking who’s doing the same thing, or even using the same name. We’ve observed similar behavior.

Partly it’s about wanting to be at the center of things – and that’s natural. And partly it’s about not realizing just how much work is involved in making an online community. I’m not sure what the solution is. One possibility is the Wikipedia experience: perhaps what happened with Wikipedia is that it was a single project which gained a good reputation, gave a good experience to many contributors, was a clear concept to grasp (a free encyclopedia), and a broad enough scope to be of interest to many, many people.

This hasn’t happened to the same degree in architecture, design or sustainability, though we’ve made good progress on Appropedia – especially as we’ve come from a number of different projects and chosen to collaborate rather than compete.

Another key element in collaboration is a recognition of our limits. As Wes Janz noted (quoted in the same blog post)

“…And, you know, it’s all good, an orphanage in Sri Lanka, house inspections in Mississippi post-Katrina, a community center in Kenya… But I just got sick of it and had this idea that you should change the name of DWB to Designers With Borders. As in, maybe there should be some boundaries, some active awarenesses that we are unqualified, or unfit, or unable to work borderlessly.”

Not that we need to be changing names – just recognizing our limits. I can’t recall who said it, but it is our weaknesses that make us great, not our strengths, for our weaknesses lead us to work with others and create something greater than ourselves.

Pardon this meditation on failure. There are many encouraging successes to dwell on, support, and learn from, and we’ll continue to do that. A cautious recognition of where things go badly pear-shaped is one side of the coin of success, and we do well to keep both in mind. 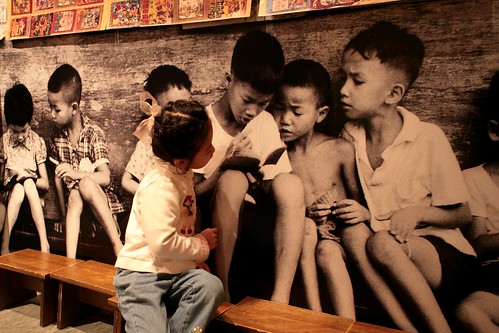 From Curiosity and Creativity in Children (OpenEducation.net blog):

Professor Steven Dutch takes very strong exception to the assumption that curiosity is innate… In his eyes children are not innately curious. Instead, they are tinkerers with generally short attention spans.

…“curiosity and creativity collide headlong with another trait deeply rooted in biology, the desire to minimize effort and expenditure of energy.”

This rings true for me, but note that in his direct quote, he’s not saying curiosity doesn’t exist, just that it’s overstated, and opposed by other forces. (Read a book or eat an ice-cream? Watch a documentary, or a cartoon?) And this is a highly relevant question for open educators, in terms of how we engage people.

When I refer to open education, I include projects such as Appropedia and Wikipedia, in the broad sense of offering education to all of society.

So how has Wikipedia engaged people and garnered such an enormous community of contributors? Here’s one thought: Although most of us might lack general curiosity, almost all of us have areas of curiosity. And in Wikipedia, they almost certainly have an article on your area of curiosity (and possibly a whole category structure) where you can learn more, and also share what you know.*

There is curiosity there. Those of us building community for collaborative projects just have to find it, and tap into it.

*I was going to add “and if there isn’t an article, you can create one!” but that’s not so easy on Wikipedia any more. Appropedia is still very open, because it’s newer and has different aims, different criteria, and a different approach to community.

The wiki pages that make the news are Wikipedia articles where things go wrong – libel, conflict of interest and the like. It’s worth taking a look at an article where things work differently – for example in the following case of an article about an environmental technology.

In ﻿September 2005, an anonymous editor added a piece of information to Wikipedia about wastewater treatment equipment:

UASB – Upflow Anaerobic Sludge Blanket technology normally referred to as UASB Reactor is used in the treatment of wastewater.

That was the entire UASB article – no categories, no images, no links, no formatting. Not even a comma.

Four and a half months later came the second and third edits – a cleanup tag and a suggested merge. Thanks to these tags, I found the article a few days later, and thought: Merge? A UASB is a really cool piece of technology – it deserves its own article! So I helped turn it into a short but respectable article. After a quick consensus on the talk page, the merge tag was removed.

At this stage this stub article (an article with just a few sentences of useful information) painted a broad picture, describing a valuable piece of technology that turns waste into energy, at the same time as it cleans wastewater. It would be a good place to learn the very basic facts, and had some valuable links to more in-depth information.

I went back to working on the appropriate technology articles (this was shortly before Appropedia started) and left the UASB article for someone else to develop further. Another editor improved the article a little, and then, less than 2 months after I did my basic work the article, came a new Wikipedia editor with a passion for water technologies.

Vortexrealm‘s userpage says he works in the field of waste management – but more importantly, his edits showed a consistently good understanding of water and wastewater treatment. 11 weeks and many edits after he started on the article, a solid, informative article had been created, including a photo he took himself of a wastewater treatment plant with UASB. The article had become a great starting point for anyone – student, worker, curious citizen – who might want to know about a valuable piece of sustainable technology technology.

Today the article, renamed as ﻿Upflow anaerobic sludge blanket digestion, is even better, after still more work by a number of editors, both regular editors of the article, and new editors.

The history of some articles on Wikipedia is smoother than others. This is what it can look like on the many, many occasions when it works well.

(Note: All of these changes can be seen via the articles history page, linked from a tab at the top of the page.)

If you can add to or improve these instructions, or want to see the most up to date version, go to Search bookmarklets on the Appropedia wiki.

Highlight text on a web page, click a button on your bookmarks toolbar, and perform a search for that term on Appropedia. Sound handy? Here’s how you make the button (I’m using Firefox, but I think it will work similarly on other browsers):

I’d rather just give a links to drag and drop, but creating javascript links in WordPress or in MediaWiki is beyond me. If you know how, please help us out, so we could add this to the front page of the wiki, and put them in blog posts.

You can do the same thing with other wikis, e.g. this is the code for the French language Ekopedia:

And this is for Wikipedia:

Making your own bookmarklet

Or do you want another wiki or website? Easy – the following method has worked for any MediaWiki site I’ve tried. (It should work for most other sites as well, though you may have to adjust it a little.) Let’s take [Greenlivingpedia:|Greenlivingpedia] as an example. Just go to the site and search for something that you isn’t a page title in the wiki, such as qwerty. Then look at the url:

Just delete the search term (qwerty), and anything after it, giving you:

So, putting the changes in italics, you now have:

In the non-mathematical field there is wide scope for the use of [computing] techniques in things such as filing systems. It is not inconceivable that an automatic encyclopaedia service, operated through the national teleprinter or telephone system, will one day exist.

— Trevor Pearcey, Council for Scientific and Industrial Research, Australia, 1948. Quoted in Electronic Brains: Stories from the Dawn of the Computer Age. Hat tip to the Downlode Etext Library.

Visionary thinking, 53 years before the launch of Wikipedia.

Let’s do some visionary thinking of our own, and expand the kind and amount of knowledge available freely online, and the ways of making it available.

Do you have knowledge or tech skills? Do you want to help expand the freely available, open knowledge that will help build a thrivable world and give us a chance to get us through the climate crisis? contact us by leaving a comment below.