America, Europe and Japan have been working their butts off trying to get a high mileage car on the roads, and the only way they’ve done it is with magnificent technology that costs far more than traditional cars. India did it for $2,000. We should be ashamed.

That’s how my inner engineer responds to the $2,000, 56 mpg (US)* Tata Nano. EcoGeek also suggests other ways of responding, and they all have some validity: 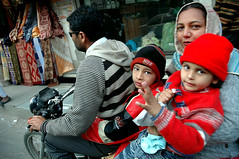 Also see a Bangalore resident’s intelligent responses to some of the criticisms, at People are missing the point (a comment on the EcoGeek post).

There are many ways of reducing our impact on the climate, starting with energy efficiency in our houses as well as our own transport choices. Denying transport options to the poor is not only unjust – it has little prospect of working.

Photo credit: ~FreeBirD®~ (CC-BY-NC-ND). Chosen because: Who the hell can tell these people they shouldn’t have a car to carry their children more safely?

2 thoughts on “Do we fear the rise of the poor?”