The wiki pages that make the news are Wikipedia articles where things go wrong – libel, conflict of interest and the like. It’s worth taking a look at an article where things work differently – for example in the following case of an article about an environmental technology.

In ﻿September 2005, an anonymous editor added a piece of information to Wikipedia about wastewater treatment equipment:

UASB – Upflow Anaerobic Sludge Blanket technology normally referred to as UASB Reactor is used in the treatment of wastewater.

That was the entire UASB article – no categories, no images, no links, no formatting. Not even a comma.

Four and a half months later came the second and third edits – a cleanup tag and a suggested merge. Thanks to these tags, I found the article a few days later, and thought: Merge? A UASB is a really cool piece of technology – it deserves its own article! So I helped turn it into a short but respectable article. After a quick consensus on the talk page, the merge tag was removed.

At this stage this stub article (an article with just a few sentences of useful information) painted a broad picture, describing a valuable piece of technology that turns waste into energy, at the same time as it cleans wastewater. It would be a good place to learn the very basic facts, and had some valuable links to more in-depth information.

I went back to working on the appropriate technology articles (this was shortly before Appropedia started) and left the UASB article for someone else to develop further. Another editor improved the article a little, and then, less than 2 months after I did my basic work the article, came a new Wikipedia editor with a passion for water technologies. 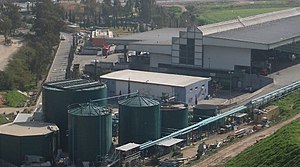 Vortexrealm‘s userpage says he works in the field of waste management – but more importantly, his edits showed a consistently good understanding of water and wastewater treatment. 11 weeks and many edits after he started on the article, a solid, informative article had been created, including a photo he took himself of a wastewater treatment plant with UASB. The article had become a great starting point for anyone – student, worker, curious citizen – who might want to know about a valuable piece of sustainable technology technology.

Today the article, renamed as ﻿Upflow anaerobic sludge blanket digestion, is even better, after still more work by a number of editors, both regular editors of the article, and new editors.

The history of some articles on Wikipedia is smoother than others. This is what it can look like on the many, many occasions when it works well.

(Note: All of these changes can be seen via the articles history page, linked from a tab at the top of the page.)

5 thoughts on “The making of a wiki page”